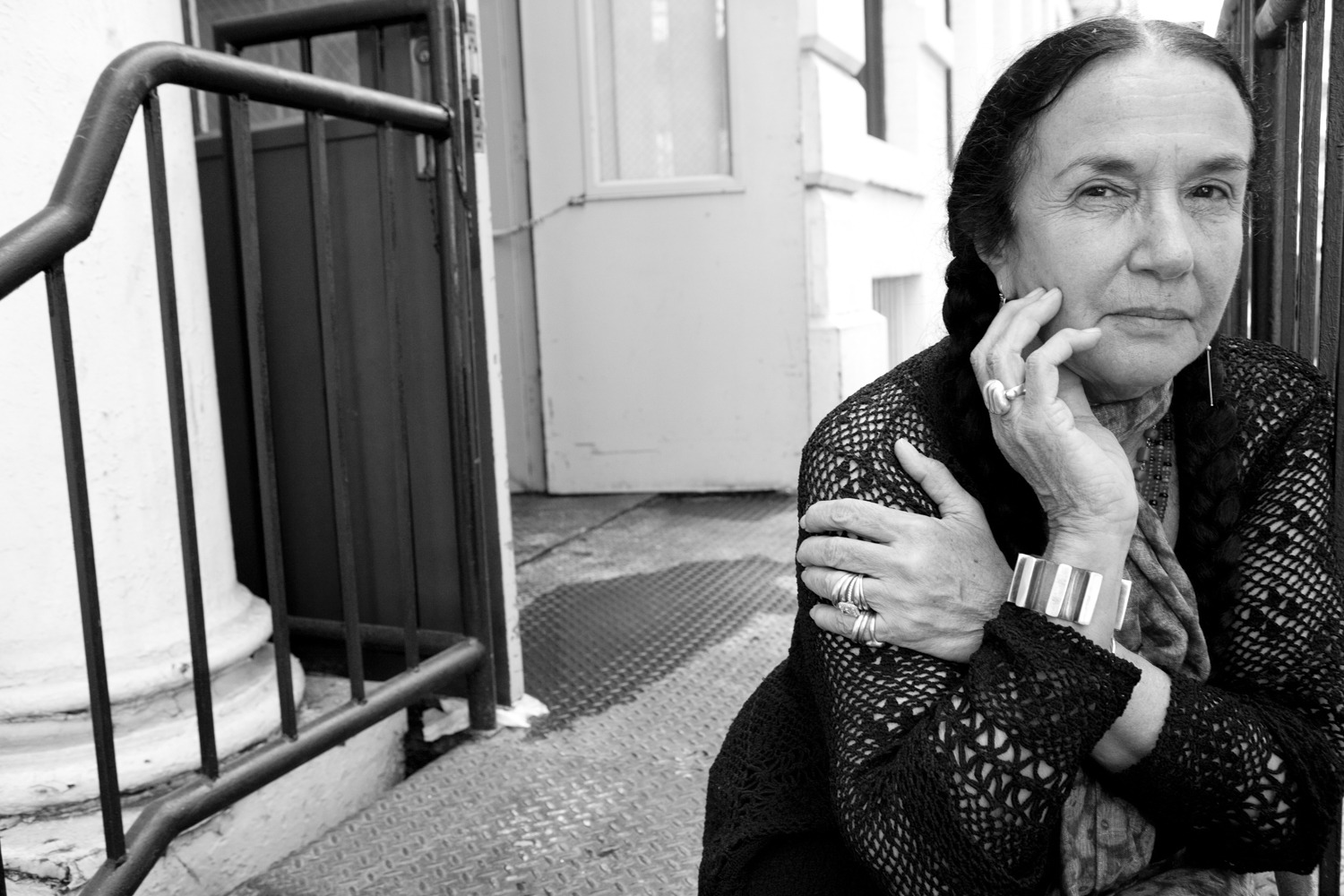 The difficulty with color is to go beyond the fact that it's color – to have it be not just a colorful picture but really be a picture about something. It's difficult. So often color gets caught up in color, and it becomes merly decorative. Some photographers use [ it ] brilliantly to make visual statements combining color and content; otherwise it is empty.

I just think it's important to be direct and honest with people about why you're photographing them and what you're doing. After all, you are taking some of their soul, and I think you have to be clear about that.

[When photographing I want to reach and touch] something that I feel is at the core of people.

To touch on people's lives [ in a way they ] haven't been touched on before, it´s fascianting. You know, it's one thing if [ a celebrity ] has an incredible character and you're really going to be able to delve into their personality – that's great. But you can never get real purity if people have been spoiled by the camera and don't trust you. I like feeling that I'm able to be a voice for those people who aren't famous, the people that don't have the great opportunities.

What you look for is a symbol of something in everyone's life.

If the background doesn’t work together with your main subject, you won’t have a good picture.

There is only one reason I’ve stayed a photographer for so many years. Photography is always challenging.

No, I don't think you're ever an objective observer. By making a frame you're being selective, then you edit the pictures you want published and you're being selective again. You develop a point of view that you want to express. You try to go into a situation with an open mind, but then you form an opinion, and you express it in your photographs.

Photograph the world as it is. Nothing's more interesting than reality.

People often ask me what makes a great image. That's an almost impossible question to answer. Sometimes the obvious can make a great image. Sometimes a photograph works because of its subtlety or what is excluded from the frame. For me, a great image involves a combination of strong content and excellent design.

In a portrait, you always leave part of yourself behind.

I don’t think you can develop or learn a “way of seeing” or a “point of view.” A “way of seeing” is who you are, how you think and how you create images. It is something that is inside of you. It’s how you look at the world.

I go into every story thinking I’m going to fail. I think about that all the time—I think it’s going to be terrible. Every story is like the first I’ve ever done.

I don’t crop my photographs. I consider the entire frame while I’m shooting. It’s a discipline I learned when I began to photograph.

I would die if I had to be confined. I don’t want to feel that I’m missing out on experiencing as much as I can. For me, experiencing is knowing people all over the world and being able to photograph.

It’s important for me to be honest. The men, women, and children I photograph are straightforward with me. I have to respect them for what they are… What I look for is compassion, not pity.

If you do great pictures it is fine art, no matter what. The galleries manipulate things, the market. If you deliberately set out to be an artist, that is the wrong way to think as a photographer. The work should be great, and that is all that is important. If people want it, and want it to put on their walls, that's great too.

There's nothing more extraordinary than reality.

A good print is really essential. I want to take strong documentary photographs that are as good technically as any of the best technical photographs, and as creative as any of the best fine-art photographs. [That is doubly important because] I don't want to just be a photo essayist; I'm more interested in single images.... once that I feel are good enough to stand on their own.

I'm trying to please myself; certainly that's a big criterion... though in a sense, I don't take images just for myself. I take images that I think other people will want to see. I don't take pictures to put in a box and hide them. I want as many people to see them as possible.

What's more frustrating than magazines giving less and less space is that they tell you what they want. Not LIFE, but some magazines actually want you to be an illustrator, and I don't want to be an illustrator -- I don't enjoy those assignments. You know, I want to have a change to be a real part of the creative process and not just a technician who clicks the camera.

I always wanted to photograph the universal subjects.

Everyone asks me how I get my subjects to open up to me. There’s no formula to it. It’s just a matter of who you are and how you talk to people – of being yourself. Your subjects will trust you only if you’re confident about what you’re doing. They can sense that immediately. I’m really bothered by photographers who first approach a subject without a camera, try to establish a personal realationship, and only then get out their cameras. It’s deceptive. I think you should just show up with a camera, to make your intentions clear. People will either accept you or they won’t.

The subject gives you the best idea of how to make a photograph. So I just wait for something to happen.

Finding the right subject is the hardest part.

Life is really very sad or it's very funny. My images are like that - sad, funny and satirical.

The best advice I can give to young documentary photographers who are starting their careers is to never lose sight of their goals and to follow their hearts.

I like the idea of being able to capture a moment in time, a moment of reality, but all that has changed now with people being able to Photoshop images so much. You don't know what is real any more and what isn't. But I am an analog photographer and it is about capturing the moment of reality. It hasn't changed for me: I shoot film and I will continue to shoot film. I think it is more beautiful. It is the reason I became a photographer. I am not an illustrator; a lot of the digital, Photoshopped photography is what I would call illustration, not photography. With that kind of work the post-production guy is probably the most important guy in the process, not the photographer.

From the book: Photo-Wisdom - Master Photographers on Their Art

If you are interested in photography because you love it and are obsessed with it, you must be self-motivated, a perfectionist, and relentless.

A great photograph needs no explanation; it functions by suggestion. There is no need to be explicit.

I don’t expect to change the world with my photographs, I just want to make pictures that have substance.

I belong to a bygone era when magazines sent you out to do a thorough report. It was a more traditional kind of photography reflecting a world that didn’t want images of it to be perfect. We don’t look at the truth anymore; instead, we look at whatever reassures us.

I prefer not to think ahead about what I’m going to say with my photographs. I would rather be surprised and see what my subjects bring to the photograph.

I want my photographs not only to be real but to portray the essence of my subjects also. In order to do that, you have to be patient.

With celebrity images they often work just because it is a famous face, and it is nothing more. I want to do more. The thing with making a celebrity image is to get beyond the celebrity.

Photographers must have a point of view – must have something to say. Without a philosophy, a photographer is simply a technician who clicks the camera.

From the book: "A few of the legends" by Peter Adams.

I consider myself both a journalist and an artist. Journalistic photography is based on "reality" in the same manner as a documentary film. You are saying this is an unbiased observation rather than being something made up or composed. This goal of objectivity pulls one way, but for me, reality is also an individual's psychological perspective and dreams. The unconscious mind contains as much reality as the "facts" of the conscious world. And, in fact, our unconscious desires influence public events. So this is relevant to journalism, although it is discouraged by our traditional, two-dimensional, "just-the-facts" approach.
When I take a photograph for a story, I try to go for both realities (inner and outer). My feelings go into my pictures. Reality is what we feel about it, not just what we see on the surface.
I like pictures that have emotion to them, rather than a two dimensional news photo. That is why I do stories rather than news pictures. The flow of the photographs gives more opportunity for depth and emotion. I want to evoke deep emotions in the viewer to reach his or her unconscious mind. Good photographs get beyond rationality to that visual, dream-like state that is the core of our emotions. [...]
I plan my photographs carefully, but the planning takes place before I ever take out the camera. I consciously put myself in places where particular situations exist and might happen in front of my camera. However, when I get there, it is no longer on such a rational level. I like to be very loose. I don't plan my pictures. I let myself go. I use the real world as my text but my unconscious as my guide.

I like the idea of being able to capture a moment in time, but all that has changed now with people being able to Photoshop images so much. You don’t know what is real any more and what isn’t. But I am an analog photographer and it is about capturing the moment of reality. It hasn’t changed for me: I shoot film and I will continue to shoot film. I think it is more beautiful. It is the reason I became a photographer. I am not an illustrator; a lot of the digital, Photoshopped photography is what I would call illustration, not photography. With that kind of work the post-production guy is probably the most important guy in the process.

If I knew how icons formed I'd have many more iconic pictures. It's a mystery.